Today is an important event.

I don't usually write about my blog because it breaks the first rule of blogging ("Do NOT talk about your blog"), but I thought I would take a moment to actually talk about the blog.  I am breaking the rules!

The second rule of blogging is... DO NOT TALK ABOUT YOUR BLOG.  I know it's the same as the first rule, but in all capital letters, but seriously.  It's important. And I am still breaking the rules.

The third rule of blogging is,  "Do not apologize for not writing enough."  I assume you know I am wracked with guilt for not keeping in touch, for posting every week or two, for not keeping up as much with my usual bloggy friends, for basically being an asshole.  Sorry.

The fourth rule of blogging is, "Do not make excuses for not blogging, or keeping up with your blogging friends."  Why?  Because no one wants to hear that you went on a new diet and its taking all your time, that you're working on your book, that you're depressed, happy, anxious, that you lost your toe in a cheese shredding incident, that you were locked in a safe for three weeks, that you're a jerk, that your cat is keeping you from sleeping, that it's "that time of the month", that your hair is annoying you, that you have decided to run away and become a mountain man, that you have decided you can't be a real mountain man because you can't grow a beard, that you're thinking about being a bank robber, but never will because you're horrible at lying and would tell the first person who asked you if you robbed a bank that yes, you did rob that bank, or that you're so embarassed about not blogging that you keep putting off blogging and then it gets worse and worse until your head is going to explode and maybe you should just never blog again because it will only lead to dissapointment and failure.  No one wants to hear all that.  They want you to tell them a story and/or make them laugh.

For example, about two weeks ago, I went on this awesome hike the day after it snowed.  It was muddy and messy and beautiful, and the sky was so clear it looked fake, and I kept wishing they would leave the sky it's natural color instead of photoshopping everything, and I didn't hurt myself.

I got home, and went to the bathroom (yeah, we know where this is going, don't we?).  There was this puddle of water on the floor and I was wearing only socks, so I took a big step over it and my foot slid a little and I pulled a muscle in my butt.

Let me reiterate:  I pulled a muscle in my ass in the bathroom.  Yeah.  Just let that sink in a little.

At first I thought it was no big deal, until I realized I couldn't go up stairs, or get from a sitting position on the floor to a standing position without pulling myself up the walls with my arms (much to the amusement of the cats who dig watching their humans act like idiots).  This was serious.

I looked up on the internet how to treat a pulled muscle, and it said to use RICE (that's Rest, Ice, Compression, and Elevation), and all I could think was that I am NOT icing my ass, and if I elevate it at work, I am going to look like a harassment suit waiting to happen, so I ended up doing nothing and it healed anyway.

I would have written about this sooner, but I started editing my book (!), and have been watching Supernatural on Netflix like it's going out of style.


The fifth rule of blogging is "No shirts, no shoes".

The sixth rule of blogging is, "If this is your first time at my blog, you have to comment" unless you are one of those Russian casino sites or a penis enlargement blog comment SPAMmer,because if you are you need to stop comment on my motherfucking blog! I am not interested in making my penis bigger, thankyouverymuch.

P.S.  If you're wondering, I haven't been bitten in two weeks.  I did NOT burn down the house, but the mysterious creatures that were eating me seem to have moved out, so yay.  I am convinced that it was, in fact, snow spiders.

P.P.S.  You can thank Misty for guilting me into finally finishing this piece so I can write the piece that she's prompted me to write with her awesomeness.

I WAS beginning to wonder if you had been carried off and eaten, or vise versa. Glad to hear its not either of those choices.

Keith: Yes, sorry. Bad blogger me. I have actually been spending the majority of my free time creating new habits with food and exercise. It is pretty time consuming up front, but I think it is starting to pay off.

Arentchucute there you writer you?!

OK I know I was supposed to pay attention to the whole post (and CONGRATS on making 100 posts by the way!) but what I got was this:

All of which proves your blog is one of those good things worth waiting for in this life. Hahahaha

If it weren't for facebook, I'd have assumed that you were wrapped inside a giant spider cocoon! Glad you're alive and well. Happy 100th. And rules be damned...I actually LIKE reading meta-blogging posts. I like it when people talk about their blogs.

Thank God the creepy critters have vacated. When does your book come out!?!? That is so exciting!

MakingSpace: Sounds like you got the important parts out of this... I'm cute, cheese shredder toe thing, ass on ice.... Yup. :)

Stephanie: Oh my. Suddenly images of the X-files episode with the loggers and the little glowy bugs that kill people comes to mind.

And actually I wrote this at least a week ago, maybe two, but for some reason I couldn't get myself to hit publish. I had a blog-xiety attack or something.

Jen: My book will come out... um. It's complicated because it's so bad. I won't let anyone else see this travesty I have written, but too many people know about it so I have to make it into something that's at least readable, and then Misty and Hoody and Gremlingirl all want a chance to red-pen the crap out of it. Meanwhile, I have started another book. This one has a plot, so it may go somewhere, but I doubt I'll finish in a month.

I injure myself in the most ridiculous ways (most recently fractured a thumb from VOLLEYING a volleyball, in a game with mostly 50+ year olds).

I love your rules. I'm pretty sure I've blogged about that time of the month because I'm classy, yo.

To healing asses and healthy habits!!


Also - any idea on how to get a book published?

StephanieC: Thanks, and I promise not to be gone that long again. I was having writer's anxiety.

And you are the only one with as many weird injuries as me... we're probably eachother's evil twins or something.

For publishing... I have already decided I don't want to lose control of my book so I will be going with self publication, which means paying a couple thousand dollars up front for editors. I will probably go with e-books for the most part (kindle, nook, pdf) at a fairly low price, and offer a free version in html for cheap bastards. Print will be available probably via Lulu.com... I also expect to have to pay for some advertising, and possibly some reviewing. It is a lot more work, but the way the industry is going, I don't believe big publishers are paying enough attention, and they are overpricing their e-books.

Um... yeah. I got lots of plans should I ever finish WRITING the darn thing.

Wow... that is both fantastic and slightly terrifying.

I have been writing on my own, with no real path/structure/consistency, and wondered how you'd even go about starting the process of considering publication.

StephanieC: Hah, well, I haven't actually DONE anything about it... I just follow people like Wil Wheaton on G+ and take notes when he talks about self publishing. It makes me sound smarter.

And yes, I do take notes off the internet, OK?

You are awesome. Congratulations on number 100, and all of the writing you are doing! And them's some good rules. I think I broke all of them today. Shit.

But that is your awesome book there.

Wagthedad: I KNOW, right? My book!!! I may be in love. Or at least infatuated. I mean, I like how it looks, but the contents are a bit trite. Hmm.

And we all break some rules. It's in the rules.

CRAP. I've been doing it wrong all this time. No wonder nobody reads my blog.

Tom G.: Not sure you should take advice from someone who is less internet famous than you are (I've been reading you!). You do follow one rule that I kinda left off of here, too. You have to write AND publish posts every now and again if you want people to read it. You're MUCH better at that than me.

According to your rules I should comment...sooo...I agree with your rules! NO-one wants to hear excuses! x

(I think the rest of your commenters missed that very important directive).

Ok, so I see a book. Hi book! What I don't see is a copy of that book in my mailbox so I can red pen the shit out of it . . . I have my red pen all ready and everything!! Send it on over.

And if only awards get you to come out of blog-xiety comas, then expect an award about every 2 weeks. I just got like 4 of them, so I'll spread 'em out, k? Either that, or bring the posts on your own. You've been warned. I think I am being quite fair.

Glad you are back!! Missed your form of hilarity/crazy.

That's awesome that you're editing! I'd just watch Supernatural.

Althea: Thanks much. Comments make the blog worthwhile. :)

Also: I have two entries stacked up at the moment, so I think the spell is broken. Whew!

Thoughtsy: Yeah, that happens a lot. BUT. I am working on editing, too.

Tom G: Credit where credit is due!

Not my first time here by any stretch of the imagination. I just wanted to awesomesauce to numero 100!

Aww, thanks, shutterboo. I was really surprised when I realized I was at 100. I was stuck at 99 for SO. LONG.

Hey! Ok first, loved this post. It made me laugh. And second, I awarded you an award on my blog!! Congrats, you win! You can check it out here: http://theartofbeebeeing.blogspot.com/2012/05/i-am-winner.html

P.S. This is not spam. Although if it was spam, I probably would still say that.. So you're probably just going to have to trust me on this one.

Woot woot! An award! beebee, you are awesome!

Leauxra
A random sampling of my brain, with photos.

The Ghost of Blogging Past 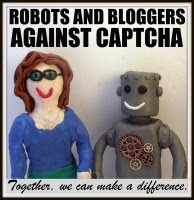 The fight against CAPTCHA.

I'm not looking for attention or anything... yes I am, FOLLOW ME!